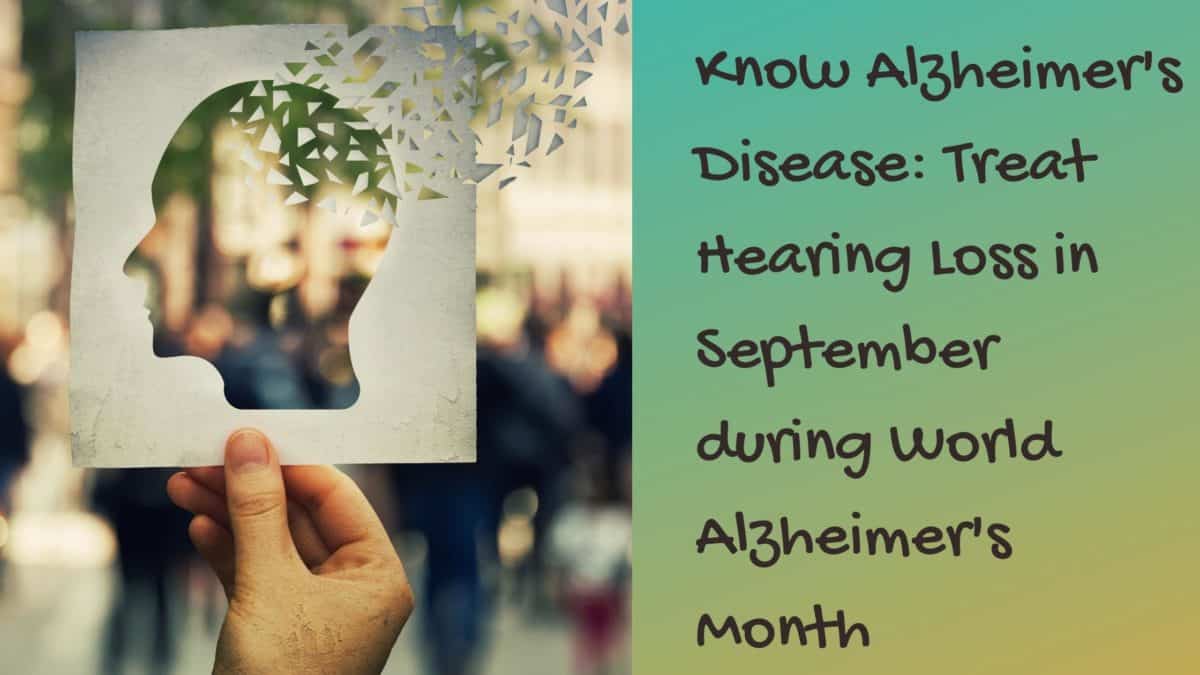 September is World Alzheimer’s Month, and it’s the perfect time to read up on a disease that affects 44 million people worldwide and 5.5 million within the United States alone. Of course, the impact of Alzheimer’s disease goes far beyond the individual diagnosed.  An Alzheimer’s diagnosis, the most common form of dementia, is a heartbreaking event for families and loved ones, too.

While it is helpful to know the early signs of Alzheimer’s disease, it is ultimately incurable. While it’s always beneficial to catch dementia in its earliest stages, one of the most powerful things you can do to protect yourself and loved ones against dementia is to treat hearing loss.

World Alzheimer’s Month began in 2012, so that the awareness campaigns led by dementia advocacy groups could extend beyond a day of recognition and grow into a full, month-long movement to shed more light on this debilitating disease. Spearheaded by Alzheimer’s Disease International (ADI), this year’s focus is on “diagnosis, shining a light on the warning signs of dementia and encouraging people to seek information, advice and support.”

Not a specific diagnosis, dementia is an umbrella term for cognitive impairments. More specifically, dementia refers to an impaired ability to think, remember or make decisions to the degree that it interferes with everyday life. Alzheimer’s disease is a specific diagnosis and the most common type of dementia. In the United States, Alzheimer’s accounts for 60-80% of dementia cases.

Alzheimer’s most commonly begins to show itself in a person’s mid-60’s, displayed by instances of memory or cognitive issues. For instance, a person might have trouble finding words, they may repeat themselves often, misplace items or become lost in familiar places.

This heartbreaking disease affects the brain. It is progressive, which means a person’s condition will continue to decline with time, as communication between neurons is interrupted and more and more brain cells begin to die.

The link between hearing loss and Alzheimer’s

The connection between hearing loss and Alzheimer’s is clear once you consider that much of how we hear actually happens in the brain. Though our ears get all the attention, they simply exist to collect sound information from the external world. Once gathered by fine cells located in the middle ear, that sound information is sent to the brain via the auditory nerve. It is in the brain that we make sense out of the electrical impulses of sound gathered.

The link between the two conditions are so strong that the 2020 report of the Lancet Commission lists it as one of 12 modifiable risk factors, saying that, “people with hearing loss have a significantly increased risk of dementia. Using hearing aids seems to reduce the risk. As hearing loss is one of the risk factors which affects the most people, addressing it could result in a large impact on the number of people developing dementia.”

Hearing aids may reduce the vulnerability of the brain to dementia by replenishing some of the sound information lost due to hearing impairment. Instead of entering into a state of reorganization because the fine cells of the middle ear have been damaged and the flow of sound slows to a trickle, hearing aids restore some of that flow. The part of the brain that processes sound information thus is able to continue functioning as is.

Other benefits of hearing aids

Of course, there are additional benefits to seeking treatments for hearing loss. They can greatly enhance a person’s quality of life, allowing them to continue the social activities we rely upon as humans to fulfill our need for connection. Most hearing aid wearers would recommend them to a friend and a vast majority report improved relationships with loved ones.