We all know the obvious signals that warn us of impending danger to our children; things like dangerous tools or environments that are obviously hazardous; and we take steps to eliminate or modify them.  However some dangerous situations are not as easily recognized.

For example were you aware that, in spite of all the warnings we’ve received about the hazards of second hand smoke there is a potential there for serious damage that we’ve heard very little about?  I’m referring to the very real potential for permanent hearing loss associated with prolonged exposure to second hand smoke.

In an article about protecting your hearing, Adam Bernstein of The Hearing Professionals, Milwaukee’s premier hearing healthcare facility, says the following regarding research into the effects on children of long term exposure of second hand smoke:

“Teenagers who’ve been exposed to secondhand smoke have a risk of hearing loss roughly double compared to those with little or no exposure.

“And the more these teens have been exposed to tobacco smoke, as measured by their blood levels of cotinine, a byproduct of nicotine, 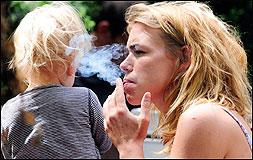 the greater their risk of significant hearing loss. Teenagers with the highest levels of exposure had nearly triple the risk of hearing loss.”

Most parents are aware that exposing children to second hand cigarette smoke can result in a myriad of health issues for them as they grow older but I would venture a guess that hearing loss hasn’t been high on the list of concerns but it should be.

Children exposed to second hand smoke don’t become totally deaf but their hearing impairment can be substantial and the sad part of that is, once into their teens, 80% of them have no idea that they’ve suffered a hearing loss. Reuters Health quotes Dr. Joseph DiFranza as saying that this fact just piles on another reason for keeping children away from second hand cigarette smoke.

Does it result in serious problems for the kids involved? Absolutely!  Adam Bernstein states in his article:

“Hearing impairment was especially noticeable in the mid- to high-frequency range, which means the adolescents might have difficulty understanding human speech. That could result in problems at school, where they may be singled out as troublemakers, fail at social interactions, or be misdiagnosed with ADHD or other behavioral problems.”

With all the other reason for keeping children away from second hand tobacco smoke already noted, this discovery certainly adds impetus. Our advice?  Redouble your efforts to keep your children from exposure to second hand tobacco smoke and if that is a problem then make certain to have them screened regularly for hearing loss, many places offer a free hearing test. You’ll be doing them a huge favor.

The content contributions of Welsch Hearing Aid Company should not be considered by anyone as a substitute for medical or other hearing health professional diagnosis, treatment, advice, or recommendations.